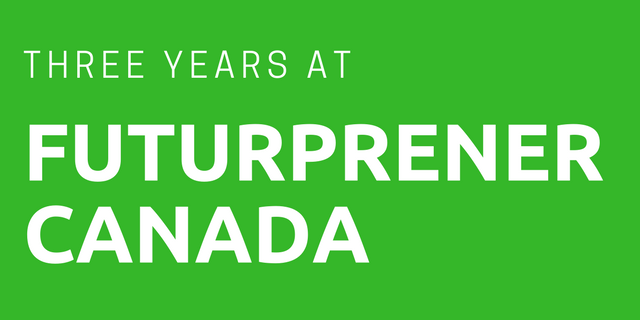 At the beginning of July I celebrated my three year anniversary working for an organization called Futurpreneur Canada. Futurpreneur is the only national non-profit organization in Canada that offers financing, mentorship and resources for young entrepreneurs (aged 18-39).

When I was hired three years ago I didn’t really have any idea what I was getting into. I had been working at Sheridan College’s student union based in Brampton and lived in Toronto. I was getting tired of spending hours of my day on the highway, in my car commuting back and forth, and my car was falling apart. I knew I needed to look for jobs closer to home and although I had two years of experience under my belt it still wasn’t an easy job hunt.

Although I did social media and content work while working at Sheridan, it was only a small portion of my job. Knowing that I wanted to move my career more in that direction it was hard to compete with people that had two years of experience specifically in this realm. I applied and applied, and finally I landed an interview with Futurpreneur Canada (back then it was called the Canadian Youth Business Foundation). My aunt who had previously worked there as a vice president had told me to keep my eyes on the organization awhile back and it seemed to good to be true that they were hiring for a Social Media & Content Creation Coordinator role.

Sure enough, I eventually landed the role. I’d be starting a job in an organization that I didn’t know that much about (other than what was on their website) in an industry (entrepreneurship) which I definitely knew nothing about. It was exciting and scary but I was excited to park my car, commute on the TTC every day and take on a challenge that was more in the direction I wanted to go with my career. When I started, the organization had never had a full-time social media/content employee and it showed! The blog was hardly used, social media channels were not consistent and hardly used and I knew I was taking on a big challenge.

Three years later, the organization has shifted their focus from traditional marketing to primarily online marketing. We’ve generated hundreds of leads from our social media and online efforts, we’ve built a blog that has new content on it almost daily and employees are even excited about social media! I’ve not just watched the organization transform into a social organization but almost single handedly got it there and I couldn’t be more proud.

However, there comes a time in many roles that you realize it’s time to move on. You’ve sucked everything you can get out of the position and you’re in need of a new challenge. So although I’ve loved my three years at Futurpreneur that have been filled with highs and lows, and has taught me about a passion for entrepreneurship I never even knew I had, it’s time for me to close this chapter of my career.

As of next week I’ll be heading over to Diply, a social news and entertainment community started in 2013 in London, Ontario. They have 68+ million social fans, is a top ten lifestyle property and 85th largest website in the United States drawing in 42+ million monthly readers. I’ll be taking on a role that is entirely different than any role I’ve ever been in and I’m excited and nervous all at the same time!

So with that I leave you with six highlights from my three years at Futurpreneur! Can’t see what’s next for me.