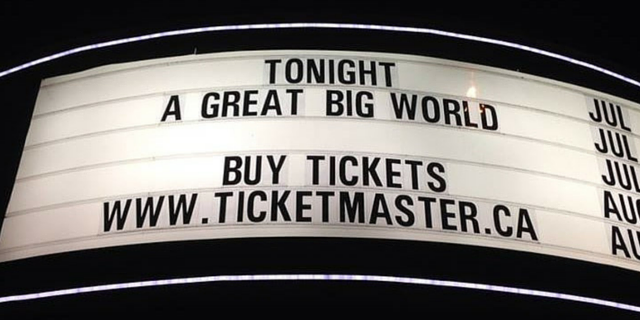 Last night I had the privilege of seeing A Great Big World perform live at the Danforth Music Hall in Toronto with Greg Holden and Jukebox The Ghost. I have to tell you, it’s been awhile since I’ve been this inspired by music.

Greg Holden came out first and charmed the audience with his Scottish accent, good looks, and acoustic tunes. He was charming, and his voice was enchantingly beautiful. One of those chill and relaxing artists that you can listen to all day, and be mesmerized by. 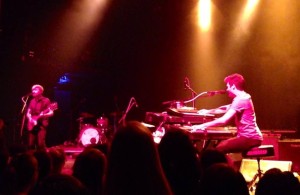 Next up was Jukebox The Ghost. Prior to this show I had never heard of them, but they blew me away, especially for an opening act. I would gladly pay to just see them in concert in the future. This band of 3 guys stage presence was phenomenal. The whole band was quirky and awkward, especially the lead singer who did a lot of the talking between songs. Just what you’d expect from an indie-pop band. There music was fun, but mellow and I’m definitely going to look into purchasing one or all four of their CD’s.

Last but certainly not least, was A Great Big World’s performance. I had seen this band perform back in January when they came to The Drake Hotel. As much as I was already in love with their hit single “Say Something” I fell even more in love with this quirky duo at their first concert. When I saw they were returning to Toronto I had no doubt about going, I would have gone and seen them alone if I had too. 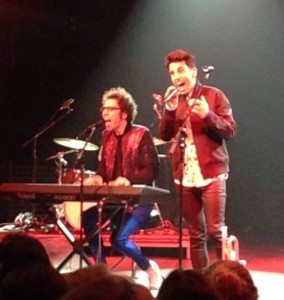 To start the concert, the lights went out, and the song “Circle of Life” began to play within the venue. Most people thought this was randomly awesome, but those that have been following the bands journey, and reading/watching interviews with them, you’d know that their favourite musical is the Lion King. Everyone loved it and was singing along in anticipation for the arrival of the band.

The band finally came out and started their set with their song “Rockstar” from their album. The bands two lead singers, Chad and Ian are so loveable. You can tell by their stage presence that they are two down-to-earth guys who are so grateful for their success and fame already in their careers. They really try to connect with the audience by sharing stories behind their music, and their friendship throughout their concert, and you can’t help but fall in love with this pair.

There are 3 other members to A Great Big World, their drummer, base player, and guitarist. All of them were very entertaining too watch. They didn’t need some glamorous set like you see at concerts for huge artists, th 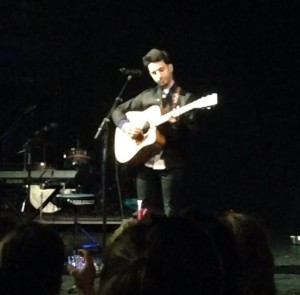 Although the band performed together for the majority of the show, there was one song Chad did on his own, called “I Don’t Wanna Love Somebody Else”. You probably have never heard such silence come across an auditorium. Chad’s voice is breathtaking, and it’s almost hard to believe that at one point he was just Ian’s Manager before they decided to team up. 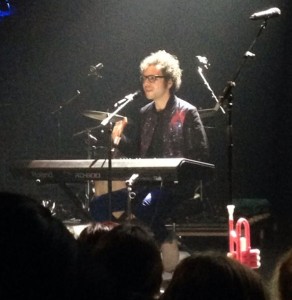 Later on, the rest of the band left the stage for Ian’s solo performance, of no other then “Say Something”. Once again the silence across the crowd was indescribable. The only sound that could be heard was the beautiful voice of Ian, and his piano. This guys voice can seriously make your heart melt, not to mention his overall personality adds to the equation. Before performing the piece, he gave an intro describing how this song blew up, and how it allowed for them to take off as a band. You can tell the sincerity, and the honest thankfulness you had in his voice.

Other then the two solo performances, and a handful of all their fun, and catchy hits from their CD. Another notable performance of the night was their “Shorty Don’t Wait” performance where they called the members of Jukebox The Ghost, and Greg Holden back on stage to join them. These guys rocked it.

Overall the concert was aweso 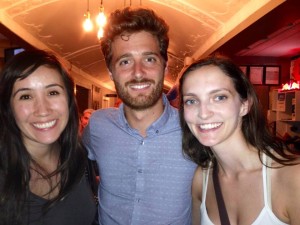 me, and I couldn’t have asked for it being in a better venue. It wasn’t sold out, and there was lots of room on the floor. The classic, old theater was a perfect venue for these hip, up and coming bands. Jukebox The Ghost, and Greg Holden even came out to the lobby afterwards to sell merchandise, and interact with fans. My favourite part about attending these types of concerts, is how down-to-earth these musicians are. You can tell they aren’t in the business for money, or fame but they genuinely love what they do.

I would strongly recommend to go out and support these guys if they are hitting your town on their tour! Even if you don’t know any of their music, you’ll leave being their new biggest fans.