The Time I Went Viral 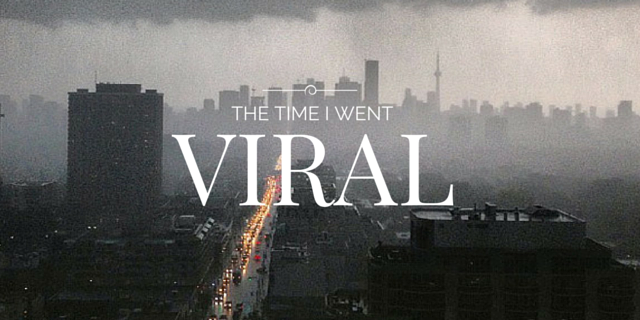 Once upon a time, on a very snowy and icy day in Toronto, a girl named Lauren Marinigh went momentarily viral. It all started with the ice storm of Toronto on December 22, 2013. The second biggest storm of the year in Toronto. The first being the flood in the summer of 2013, where many parts of the city were without power for days. This photo below was posted by Blog TO from the summer rain storm when the city looked like a ghost town without any lights.

With the second major storm in Toronto leaving many Torontonians wondering if they’d have power for Christmas that year, the storm reminded me of this haunting photo from the summer. So innocently I posted the above photo, with no mention what storm it was from… and that’s when it all happened. 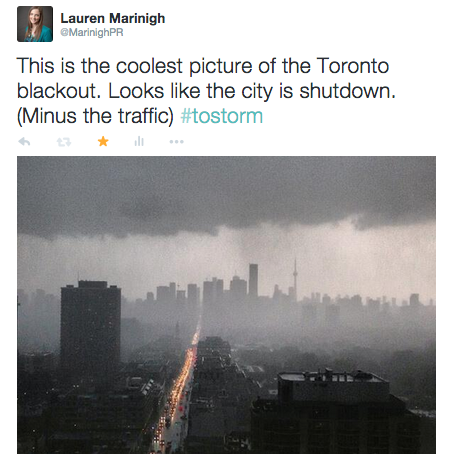 People from every which direction started to jump down my throat claiming that this photo a) wasn’t mine and b) was not from the storm that was currently happening. As I started to respond back informing people that I didn’t claim it was my photo or what storm it was from, the tweets kept coming in. My phone was blowing up! Some people jumping at my throat to point out I was wrong, others just re-sharing as it was a cool photo. People were jumping to conclusions left, right and centre. A news channel even picked up the tweet and showed it during their weather update. I felt like a bad rumour that just kept spreading. The tweet was retweeted 238 times, and favourited 138. On top of that there were several comments, mentions, etc. that went along with it.

My phone would not stop blowing up with notifications from people. People who were sharing friendly comments about the city like below:

To some people just blatantly pointing out the obvious (P.S. people if this was in the winter, there would be snow, remember!):

Finally, to the people who were comforting me in a time of pure chaos for an ordinary gal who innocently tweeted a photo:

It slightly blew my mind. I mean, people share photos every day on Twitter with the hashtags that happen to be trending, and nothing happens but for reason, this tweet rubbed people the wrong (and right) way. It was pretty cool seeing my Twitter have hundreds of notifications every time I turned on my phone, but made me realize that I could never be famous and deal with all this social media action. It was an interesting day to say the least in the world of Lauren, and gave me a sneak peek into going “viral.”