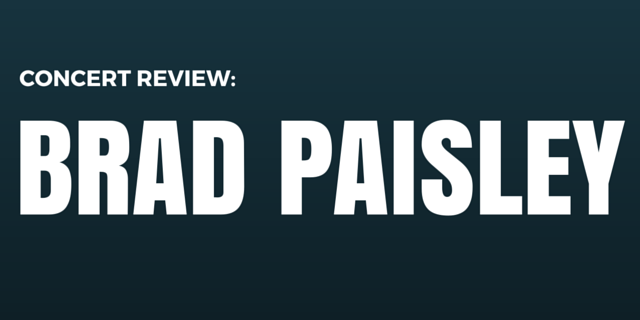 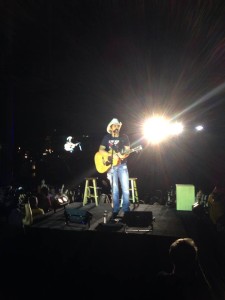 Yeee-hawww! My first country concert of the summer, and boy was it a good one! Brad Paisley played at the Molson Ampitheatre in Toronto last night on July 2nd. He tore up the stage, and left the cowboys and girls in the crowd in awe by his awesome concert!

Brad has multiple opening acts, Charlie Worsham, Leah Turner, and Randy Houser. All of which we skipped because to be honest, no one goes to a concert for the opening act! We arrived just to catch the end of Randy Houser who seemed to put on a great show! Not to long after the end of his set, Brad entered the stage. Kicking off the night with Moonshine In The Trunk.

He went through all his classics as well as some of his old stuff, which I prefer because old stuff is usually the best stuff (and the most well-known). He sang the classics like Ticks, Alcohol, Waitin’ on a Women, and Online, complimented by his newer music like Four-wheel Park, an 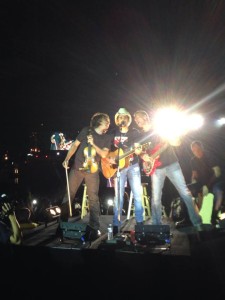 He also did his and Carrie Underwood’s song, Remind Me, with a hollogram of Carrie that looked so real it almost had everyone doing a double-take to make sure Carrie wasn’t actually there! To end out the night he sang Old Alabama, and Alcohol for his encore, in which his final song he brought on a huge group of people to party with him – seemed like they may have all been VIP, and friends of the band though. One person in particular was Chad from Nickleback which Brad called on to sing Alcoho 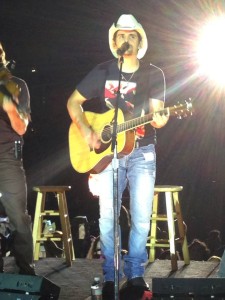 l with him. Considering Canada’s hatred for Nickleback, I was pleasantly surprised when the whole crowd cheered for him!

One of the highlights of the entire night was Brad’s infamous second stage. We were sitting in section 405, row A, which are pretty far back but dead centre. We noticed there was equipment in front of us that was covered with a tarp, and sure enough we found out pretty quickly that was his second stage. Before we knew it he was right there in front of us performing a handful of songs. There was even a little girl in a wheelchair who he allowed in the restricted area to give him flowers, and take a selfie with him. Cutest thing ever!

All in all, Brad brought down the house. The Molson Ampitheatre has to be one of the best venues (on a sunny, clear night) for any concert in the summertime, especially a country concert. There’s very few artists that I’d go see time, and time again, but Brad Paisley is one of them. He puts on a great show, is entertaining, and the night always ends as a good one!