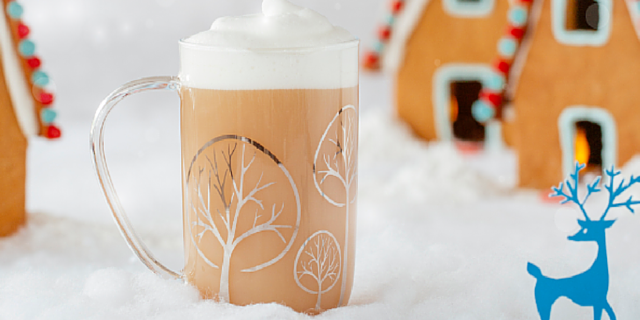 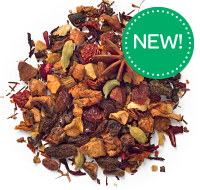 Sugar Plum Forest was one that I wasn’t too pumped about either, but I heard DavidsTea fans ranting and raving about this one. This seems to be one of the more popular ones of the collection. This tea combines apple, cardamom, chili, cinnamon, plum, cloves, ginger, hibiscus, licorice root, raisins, rooibos, rose hips and star anise bits. Looking at the tea itself it’s beautifully wintery! This tea is a bit spicy, which is to be expected when you look over the ingredients. I can taste a bit of apple through this but not really any plum. It’s a much more spicy tea then anything else. This tea almost reminds me of a mulled beverage and is comforting for a cold, winter night. I wouldn’t say it’s one of my favourites, as I find the cinnamon a bit overpowering of the other flavours, but it’s for sure good! 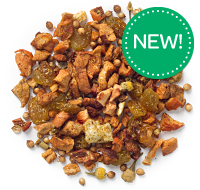 I received a free sample of this tea for Halloween and I wasn’t too excited to try it. I’m not a huge apple fan, and past apple teas weren’t necessarily my favourite, but this tea is great. In fact, I think they could even get away with calling it just “Custard” as oppose to “Apple Custard” as the apple is not to evident within this tea. The ingredients of this one are apples, golden raisins, coriander, chamomile, vanilla flavouring. The vanilla flavour of this really shines through, giving it that custard/creamy taste. This tea also isn’t overwhelming in the sweet department which some may assume. Although a creamy tea, the sweetness is not too much to handle like some other dessert teas.

I wasn’t quite sure what to expect from this oolong blend. Mixing oolong tea, roasted chicory root, pineapple, papaya, cinnamon, walnuts, apple, ginger, roasted almonds, cardamom, rose pepper, pistachios and rose blossom, this tea has way more ingredients then most of the other teas. Since I don’t really know what baklava is, I can’t compare this tea to what the actual dessert tastes like. I was surprised by how much the blend grows in size when steeping, my steeper looked hardly full to being full to the brim. This tea is definitely nutty, but I like it way better than Forever Nuts although I find it a bit similar. The fruit, and cinnamon adds a flavourful twist to it and it definitely tastes like a comforting dessert that’s perfect for winter. 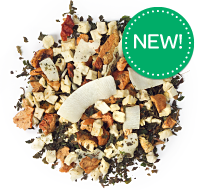 This tea combines apple, coconut, sweet blackberry leaves, peppermint, spearmint, and natural coconut flavouring. Hearing about this tea I thought this would be my favourite of the winter collection, and although I like it, it’s definitely not my favourite. I read in another review that the smell is similar to dill pickles, after reading that that’s all I could smell and think about. The tea itself is very coconut-ty which is to be expected, but although some of the mint seeps through in the taste, it’s not as overpowering as you’d hope. I didn’t mind this tea at all, as I love coconut, but to me it didn’t taste like a tea that belonged in the winter collection. I was hoping for a more candy cane taste, which I didn’t receive. This tea is great, but I think it would fit in more with one of the other seasons! 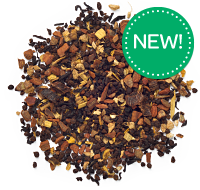 This tea combines cinnamon, black tea, licorice root, ginger and vanilla. I didn’t mind this tea at all and wasn’t extremely disappointed like other DavidsTea fans were. This could be because I heard some mediocre reviews about it before trying so I didn’t have my hopes up. I find once again that the cinnamon is what over powers this tea. I do taste a bit of vanilla but I find that the cinnamon overpowers it a bit like cinnamon usually does. I do find this tea comforting as I do most chai teas in the cold weather, but if you’re not a cinnamon person you’ll definitely be disappointed in this one!

I’ve also started a Facebook page for DavidsTea fans to unite and chat about all things tea, exchange teas they may not like, and more! Join now.