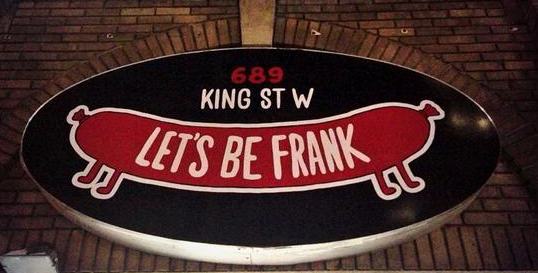 I hope my title of this blog post didn’t put your mind too far in the gutter ;)!

Recently I was walking down King Street on my way home from the bar and came across a delicious pop-up shop that I wish I knew existed sooner. I’m pretty sure when I spotted a hot dog shop at 2am from across the street, the clouds parted and I could hear angels singing. Yes I love hot dogs that much. 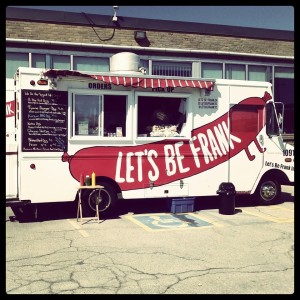 Anyway, what is this mysterious pot of gold of a shop? It’s called Let’s Be Frank, and let’s be frank, it is Delicious with a capital “D”. This store is a pop-up shop that opened up in February 2014 at King Street West and Bathurst. Let’s Be Frank originally was known for being a food truck that attended local events in the GTA. Obviously since food trucks are on wheels and not the easiest to track down, I had never been introduced to these gourmet hot dogs until I found the pop-up shop on King Street. 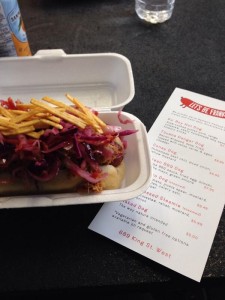 The menu at Let’s Be Frank has a wide variety of different types of dogs with all sorts of toppings, even things that you’d never expect to taste good on a wiener. From the Po’ Boy Hot Dog (my personal favourite) that has pulled pork, coleslaw, homemade barbeque sauce, and hickory sticks, to the interesting dessert dog that is a deep-fried banana with peanut butter, jam and Nutella. The interesting combinations at Let’s Be Frank is what makes this place 10 times better than your regular street meat vendor. Not to mention they have delicious weekly specials, last weeks was a Mac & Cheese Dog that had (you guessed it), macaroni & cheese on a hot dog with bacon and barbeque sauce. I was heart broken when this was sold out when I stopped by on Sunday to get one. I mean hot dogs and mac & cheese?… there’s no better combination then that!

Let’s just say if you find yourself at King & Bathurst, pay a visit to this magical hot dog land. I’ve been told via Twitter that they’re only going to be there at max a few months longer, so visit while you can!