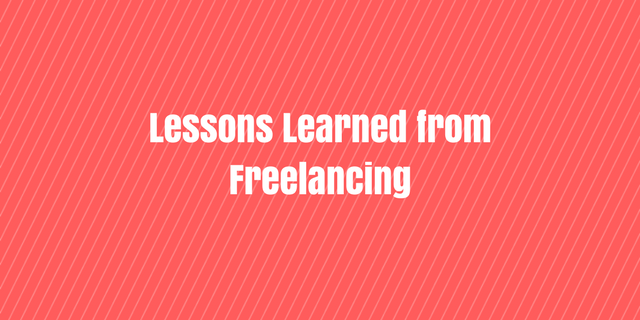 Many people dream about going entirely freelance—the ability to set your own schedule, be your own boss, and work outside of the three walls of a cubicle, but seldom do people fully take the leap, or really understand what it takes to be a freelancer.

I started freelancing about a year and a half ago. It wasn’t something I ever really saw myself doing or really thought about, it just kind of happened. In 2013 I launched my blog and online portfolio. I mainly created it to help me land a full-time career—employers were always asking me to send work and writing samples, so this seemed to be the easiest solution.

When I launched my website, I suddenly was starting to get a lot of attention. I had people finding me online and through LinkedIn and emailing me to do different projects—from writing for them, to social media strategies. At first I took on every project that came my way (paid or unpaid), I was excited and eager that people were noticing me and trusting me as an “expert” in my field. But with starting to freelance came a lot of lessons and learning curves. Here were some of the things I wish I knew and lessons I learned (the hard way).

You can’t say yes to everything

I’m not one of those people who decided to go 100% freelance—I have a full-time job, and also run two of my own blogs, so saying “yes” to everything that came my way would just be impossible. When you’re first starting out you find it difficult to say no to people. Every project that comes your way, especially if it has a good price tag on it, you want to be able to take on. In reality though, it’s important to realize that saying no is not a bad thing—simply telling people that you don’t have the capacity to take on another project shows that you’re professional. People don’t want you to take on their project if you aren’t going to have the ability to actually spend the time on it that it deserves.

If a job doesn’t have a contract, did it really happen?

The one thing I’ve always been told is to make sure you have a signed contract in place with every freelance project you take on. Often times the people you are working for you never meet in real life, and depending on someone to transfer you money online can be wishy-washy. Not like you’ll want to spend money on legal fees if someone goes against an agreement, but usually if there’s a contract in place it holds all party’s more accountable.

I’ve been one of the lucky ones that have always used contracts and never had a problem, but sometimes I simply get lazy. Recently I didn’t do a contract and when I sent a draft of the work I did to the client, I never heard back again. A simple contract may have saved me from wasting my time doing work for someone who doesn’t even respond, let alone pay me for what I did.

You can’t always count on it

I commend people that can go 100% freelance and not depend on the steady and guaranteed income of a full-time job. What I’ve learned about freelance is that there are some clients that will want you to do continuous work for them (Example: writing for their blog every single week indefinitely, or managing their social media accounts on a daily basis), but there are also many projects that are just a one-off thing.

99% of my projects have been one-off projects—I build a strategy or plan for them, they take it away and run with it themselves, and I never hear from them again. I’ve had months where I bring in a lot of extra income, and months where I bring in none. So my advice is that if you are doing freelance on the side—don’t get all excited about one project and go do something crazy like buy a house or a new car, realize that you can’t always count on that income, so learning to live without it is important.

I still to this day have trouble pricing out and quoting projects to clients. I’ve learned that every single project is different—I can develop two marketing plans for two different clients, yet one could take 2 hours, and one could take 8. Some freelancers find it easiest to charge by the hour, but I personally am someone who will work on a dozen things at once so I find hourly billing to be awkward and hard to keep track of.

What I’ve learned is that you need to look at the project, determine how long it may take you, look at the different factors of it, and then decide how much your time is worth. Sometimes if I know the client is a small business, non-profit, or probably has a limited budget, I’ll ask them what their budget for the project is to give me a ballpark idea of what I’m working with or if it’s realistic. Also, don’t be afraid to say no! Knowing how much your time is worth is important. I’ve had people come to me wanting a ton of work done but only are willing to pay a small amount, in some cases, if this is a really cool project or client, I may decide to take it on, but for the most part, you shouldn’t be afraid to tell people that they are paying too little.

Sadly there are lots of people out there wanting to take advantage of freelancers, and there are also a lot of people that just don’t realize the amount of work they are asking for is worth a heftier price tag then what they are offering. Knowing your worth, choosing your projects wisely, and covering your butt with a contract, are going to be the things that will guarantee you to thrive in the freelance world rather than crumble.

Freelance for me has opened up a lot of doors, as a young professional, it has given me a lot of additional and diverse pieces of work for my portfolio, and opened up lots of doors in my industry, but it’s definitely something that isn’t for everyone, so don’t be afraid to test the waters and determine that for yourself.

How to Pull Yourself Out of an Overrun Slump

How I Choose My Freelance Projects

How to Juggle a Full-Time Career & Freelance Work
TAGS AdviceFreelanceFreelancingProfessional