Last night I attended one of the most interesting experiences I’ve yet to have at a concert so far in my life. You guessed it, the Miley concert at the Air Canada Centre. After attending this concert, I decided this is a great opportunity to launch a new section on my blog of reviews. Reviews of concerts, restaurants, movies, music, whatever it is I feel like reviewing. Anyways, back to Miley.

Throughout my life I have been privileged to attend quite a few concerts. Miley Cyrus wasn’t necessarily at the top of my list of concerts to attend, but my Dad has seats at the ACC and had the tickets. Therefore, we thought we would go see what it was all about.

This concert was not like any other. I wasn’t really sure what types of crowd members I’d witness at a place like this. Would parents still think she was the sweet & innocent Hannah Montana and bring their pre-teens to the concert? Would there be creepy men in the audience? People my age? Anyways, I would suggest to people to purchase tickets  just to sit and people watch. There were kids in their underwear (literally), Mom’s & Dad’s who looked miserable to be dragged to the concert, girls who were clearly on serious drugs, and then average, normal people like us. It was really a site to see.

From a person like Miley, you wouldn’t expect anything less than her entering the stage from a giant picture of her face. The mouth opened up and a pink slide came out to resemble a tongue, in which she obviously went down.

After her grand entrance, the show only got weirder from here. What happened? 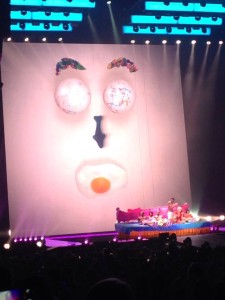 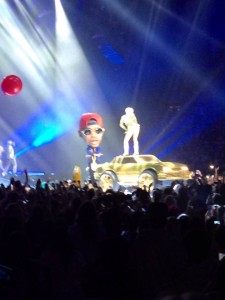 This is only a few of the many highlights of weirdness that came from Miley’s concert. Overall what did I like from it? It was a show! Pure entertainment. A concert/production that you don’t always see from artists. Miley clearly embraces being different and not being ashamed of it, which is somewhat admirable.

Would I recommend a Miley concert to anyone? You definitely have to go in with an open mind and you’ll end up having fun! I strongly suggest leaving kids under the age of 18 at home. Unless of course you want to expose them to sex, drugs, a lot of F-bombs, half-naked kids & young girls OD’ing in the bathroom. Let’s just say Hannah Montana is dead, and if you go expecting she’ll perform her sweet, innocent ballads, you’ll leave horrified…. well you may leave horrified either way!

Anyways, definitely a concert for the books. Will I go again? If tickets fall into my lap I won’t refuse, but I won’t be rushing out anytime soon for tickets the next time she’s in Toronto.