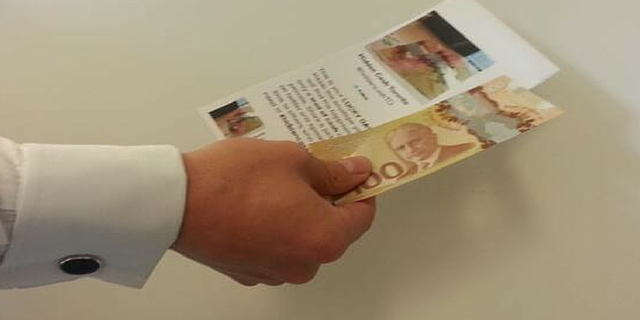 Alright, so a little bit of a backgrounder on this Thursday night adventure I just encountered. For those of you that may have not heard (if you live under a rock) there’s been a mystery person in San Francisco hiding wads of cash around the city and providing clues via Twitter to help his followers find that hidden cash. Recently someone has decided to jump on this idea and create a hidden cash Toronto.

So naturally I managed to stumble upon this Twitter account and follow it over the last day. I noticed before I left work tonight (in Brampton) that they tweeted their first clue to their first hidden envelope of money. As I was driving home I assumed that someone would find it pretty quickly since the first clue was that it was around City Hall right downtown Toronto. When I was stopped in traffic I took a quick look to see if anyone had recovered it yet and no luck. That’s when I made the decision that I was going to join in on the fun. I passed the exit to my house and continued downtown. My adrenaline was going, I was determined to get this envelope of cash. I was going to be the first hidden cash Toronto winner!

I managed to fight traffic and get myself about a 5 minute walk away from the location. I parked my car and paid for my parking. Literally as I was racing back to my car to put my parking ticket on my dashboard I saw the dreaded tweet…. the cash had been found! My heart sank, and my Amazing Race style high was gone down the drain. I sadly got back in my car and drove back home. $6.00 in parking + gas money down the drain and I was sadly not the hidden cash Toronto winner. BUT it was an adventure and I mean at least I can say I was in second place!

Congrats to the winner of tonight’s hidden cash Toronto. I will be steadily tracking this Twitter account because now I’m determined to win. If anyone knows me, they know that I’m addicted to trying to win contests and I’m a major supporter of this wicked idea. If you have wealth, why not share it, and if each person that finds a hidden envelope pays it forward to do something wicked, the world will be a wonderful, happy place!

Until my next hidden cash adventure… adios!