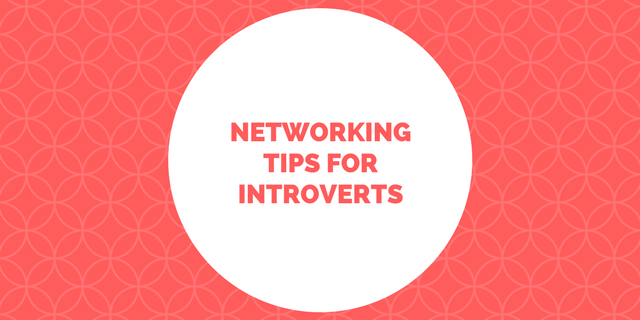 I’ve talked about how much I hate networking before. As an introvert, networking is just too uncomfortable for me. However, I obviously see the value in networking as a young professional and when I actually do force myself out of my comfort zone I never regret it. But how do you overcome that initial anxiety of attending a networking event and how do you make sure you actually leave these events feeling as if you took full advantage of the opportunities? Here are some tips.

As an introvert it may be an overkill to believe you’re going to make 15 quality connections or have just as many conversations at a networking event. Instead, manage your expectations to be more realistic to the person you are. Remember that one quality conversation can be just as good as 15, so don’t feel like every networking event you attend is a waste just because you didn’t leave with a stack of business cards.

It can be hard to drag yourself to networking events but I find setting goals for the event can help me get through them. For example, tell yourself that you’re not allowed to leave until after you’ve been there for an hour or have handed out at least two business cards. Forcing yourself into an uncomfortable situation can be hard but if you set goals for yourself it can keep you focused and make you feel better about them. And hey, if you end up staying longer than that’s great.

Bring a partner in crime

I’ve learned that this is one of the most effective things for me attending networking events. Bring someone along for the ride with you. Often times it can be easier to join in or approach a conversation when you have someone by your side and when a conversation runs dry, you at least have each other to bounce off of. I always find my confidence level significantly increases too!

Sometimes networking events and rooms full of people are just intimidating and not the right way for you to network. So instead, network one-on-one. Invite people you meet (or have on LinkedIn) out for coffee or get your mutual friends to help connect you. Having one-on-one time can be significantly less intimidating and can actually almost be better in the longer run because you’ll be more memorable to that person given they aren’t meeting a million other people at the same time.

Practice makes perfect and sometimes it can help if you do practice and prepare prior to the event or meeting you are attending. Have an idea of what you want to talk to people about and what your elevator pitch is. Often times we don’t talk about ourselves so when people ask us about what we do and who we are we can feel uncomfortable on what to say.

Networking doesn’t always get easier for people, especially for people like me who spends a large portion of my time behind a computer screen. However, there are lots of benefits of pushing yourself out of your comfort zone and some of these tips can make networking feel a little less intimidating.

What You’re Doing Wrong on LinkedIn

Why You Should Volunteer