Rediscovering Your Passion Later in Life 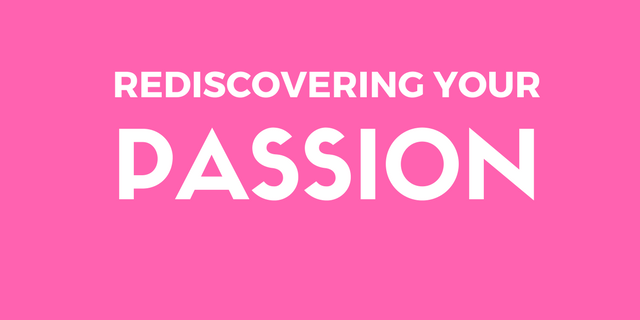 You’re a senior in high school, and all of a sudden realizing that you need to “figure out what you’re doing with the rest of your life”, a thing that many people in their 30s are still trying to figure out, let alone a 17 or 18 year old.

For some young people, this decision can be overwhelming and stressful, for others it may be clear as day. For others, it may hit you like a ton of bricks after you’re knee-deep in student debt, graduating with a piece of paper that qualifies you for an industry that you may wind up hating.

The thing that I find so wrong about our society, is that not only are we forced to make life-altering decisions before we even have a chance to explore what’s out there, it’s frowned upon to change directions once you’ve already dived in head first.

For me, I was determined to be a child and youth worker, which thankfully, in grade 11 sociology class, I realized that this field would not be for me. So I changed my college applications and applied for business and arts programs, because that was essentially, the only classes I enjoyed and excelled in as a high school student. Thankfully for me, I put myself on a path that I actually enjoy, but I’m one of the rare cases.

Did I know what I wanted to do with the rest of my life? No. Did I even have any idea what or where these programs would get me upon graduation? No. I just applied to what I thought I “might” like because the natural next step for me was college.

But not everyone lucks out like me. Recently I conducted some research on post-secondary education and what helps new grads land jobs upon graduation. While speaking with some young professionals, I realized a common trend among some of them and that was that they had their “ah-ha” moment later in life. In some cases this was after years of school, and after building themselves up in an industry that they no longer cared about. They essentially, wanted a do-over, so they went against society, which would tell them to “suck it up” and chased after something that would make them happy.

Adam Cotter for example wasn’t dead set on what he wanted to do for a living upon high school graduation. He worked at random jobs and took some college courses, and eventually realized that he had to figure it out and make a decision. So he took his passion for cars and became an automotive mechanic.

After an apprenticeship and earning his certification, years later, he decided that he needed a change. He grew strong feelings (and not good ones) about his career as a mechanic and the way the industry worked. It was by chance that he found himself in a conversation with a public relations professional while volunteering with the Shriners Hospitals for Children, and realized that communications may be the right career path for him.

Eventually Adam landed himself in a corporate communications program at a college, and since graduating in 2013 has been working in the communications industry, which he now loves. “You spend 5 days a week at work. If you aren’t happy, you have to make the change,” Adam explained.

Looking back, Adam wishes he spent more time after high school trying to figure out what he wanted to do, an act that is often frowned upon, but one that can save many young people time, money and potentially spending years of their life unhappy.

Finding your calling in life happens at a different time for everyone, and now with Millennials shaping the workplace and pushing the boundaries with what they want and will settle for in an employer, I think we will see more and more people taking longer to figure out “what they want to do with the rest of their life.” And hey, who said you have to do just one thing anyway?

Questions to Ask Before Getting Social Media