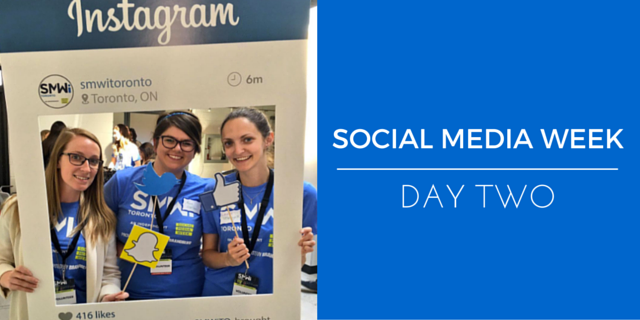 Today was day two of three for Social Media Week Toronto, and it was another good one. Today’s sessions were a bit more intimate as there were sessions happening at both BrightLane and Brainstation to choose from. I loved how there were so many options to pick from, but also was disappointed when I had to choose from two I really wanted to attend that were happening at the same time (major first world problems)!

Anyways, I heard from people that worked in the financial world like Scotiabank, to the sports side of the social world like TSN, to wicked cool brands I admire like Lululemon. Here were some of my takeaways or ah-ha moments from the day.

Have social media champions in every department.

Larissa Walker of Harlequin sat on a panel this morning with other social and digital professionals and one thing that she mentioned they did at Harlequin was to have social media champions in all departments, not just marketing. Since social media comes up in almost every meeting, this ensures that there is someone representing the social side of things, and the actual small social media team isn’t only in meetings all day every day. Love this idea, especially for small marketing teams!

Lululemon utilizing ambassadors/influencers in their own way.

Every Lululemon store has 5-6 ambassadors, these consist of local instructors, athletes, etc. and the store and brand supports them by helping in their businesses or goals, and they also support them by providing them with their products to wear. This humanizes the brand on a more local, community level. They also don’t expect or ask anything specific of their ambassadors, they let them choose to share the stories and news if they feel passionate about it on their own. Instead they focusing on giving them the support that would naturally make them want to talk about it.

Trust your team & give people the space to be creative and magic will happen. SO TRUE! @michelinateti #SMWiTO pic.twitter.com/nOIiFt6KMh

How Lululemon hands the social keys to their stores.

Lululemon has over 300 Facebook pages, and that’s because they localize their brand by giving the social media keys and tools to every store they have. Store owners have access to their own community because they know the most about what’s happening in their community and what their community wants. Lululemon trusts their employees, and most of all, hires employees that are entrepreneurial and living within the yoga/fitness space already. This expanded to having specific people in stores that are hired to spend half their time in the store and in the community and the other half of the time on social media. This helps build their employees experience and helps the brand be more localized.

Inspired by @Uber_Canada creating so many great and flexible job opportunities in #Toronto. #SMWiTO

How Uber is using storytelling to empower female drivers.

Uber partners with UN Women and plans to have 1 million drivers in their cars by 2020. To help promote the opportunities Uber can give for ladies, they started sharing the stories of other Uber drivers in their #WhyWeDrive campaign. The stories featured women trying to make some money while pursuing another passion, busy moms who can’t commit to a career or the hours of a regular part-time job, etc. An incredibly creative and inspiring idea.

This was a quick tidbit that I’m totally going to try. BuzzFeed mentioned that they had tested out the same content in two different ways on Facebook and saw tremendously different results. They posted a post with a photo with the link just in the text of the post, and then the same post but instead of attaching a photo, they just had the auto-generate link/photo. Since Facebook favours photos and videos more, their engagement and reach went from in the 100,000’s to in the millions.

MLSE is making social & digital core parts of the entire business. No longer something off to the side. #SMWiTO ?? pic.twitter.com/A9LWgqYvfP

Jonathan Carrigan of Maple Leafs Sports and Entertainment (MLSE) sat on a panel with some other social media and digital professionals in the sports industry and a question in the audience brought up this great point about why the MLSE sports team accounts do so well. He said that they try and give fans the opportunity to be that fly on the wall and to give them a behind-the-scenes opportunity to see something unique that they would never get to see in their life. Instead of just bringing game highlights, they’re bringing a more unique experience to their fans.

An influencer in the audience asked Scotiabank’s social guru, DJ, about financial institutions being a little more uptight about the influencers they choose to work for. For example, if an influencer has a swear word on their social media, they may not want to be associated with them. DJ had said that it’s all about explaining to people that brands need to be perfect, they have to be proper, and say in the financial industry, more uptight, but an influencer can be what makes a brand fun and humanizes it.

The day was filled with great insights from everyone. I can’t wait for tomorrow, but sad that tomorrow will mark the end of Social Media Week for me :(!