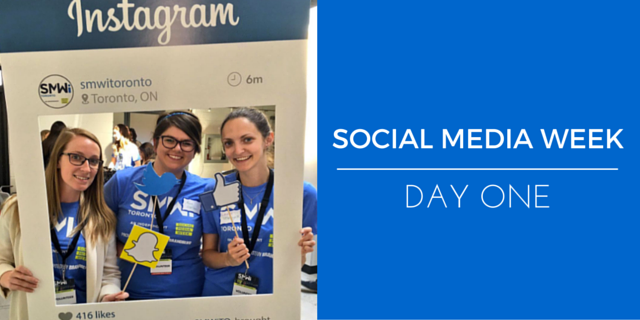 Today was my first day of three at Social Media Week Toronto, and boy was it a good one. Speakers came from some of Toronto’s (and the worlds) hottest places like Trend Hunter, Twitter, Shopify, and BuzzFeed, to share insights and interact with the crowd of social media and marketing professionals. There was even an onstage interview with the one and only, 6ix Dad, Norm Kelly.

Like any conference, there were many moments where I wanted to bow down in front of the speaker on the stage after they said something, so here were some of those moments and my highlights from the day.

Can't wait for this talk on influence marketing with @samfiorella. ?? #SMWiTO pic.twitter.com/GNX1y0WerQ

The first talk of the day was by Sam Fiorella who chatted about influence marketing, and how yes, brands should and can use influencers, it’s all about doing it strategically and in a way that makes sense. Dive deeper into the audience of your brand, and the audience of the influencers you work with – do they match? Just because an influencer has millions of followers, doesn’t mean they are reaching the people that you want to reach.

80% of CEOs believe they deliver a superior customer experience – but only 8% of customers agree.

This stat was brought up by Trend Hunter President, Shelby Walsh, who showed several examples of brands doing incredible things with their audiences that worked, and how CEOs and businesses need to look at what their customers are saying and what they want, and adapt to that.

There’s many things social can inform but we have to walk across the office and share it.

SVP of Marketing at Sysomos, Amber Naslund, talked about how we somehow coined social as being part of the marketing and communications departments, and that you’re only qualified to manage social if you are a trained professional, but employees of all departments can be a huge asset. We hoard social within our marketing departments but so much can be learned from social that can help all aspects of business.

(P.S. Next to Norm, this was one of my favourite presentations of the day!)

Change the conversation and fight back. Use it as an open platform. There’s a huge opportunity to make a change.

In a panel with Twitter, Unilever, and an influencer, MamaBe, that touched on self-esteem and social media and how Dove has been working with influencers and working to help better prepare and raise our children in the world of social media, Veronica of Twitter mentioned that we can change the conversations. As social media professionals, we can choose to ignore or we can change the conversation and fight back to curve the issues that young people will grow up with on social.

I just love @sickkids ? Great insight on how they stopped being out of sight, out of mind. #SMWiTO pic.twitter.com/9yff3l4ehV

How SickKids used storytelling to stop being “out of sight, out of mind”.

In a powerful (and tearjerking) presentation by Mark Jordan, Director of Digital Projects, Brand Strategy & Communications at SickKids Foundation, he showed us how his team used storytelling to give people an idea of what really goes on behind the closed doors of SickKids and how peoples donations actually help kids. They did this by releasing 40+ videos showing people the stories of patients and what was happening in the life of that kid in “real-time” on that day. The campaign was later followed up with an opportunity for people to see these kids today and where they are now since the original videos. The campaigns were an incredible example of how powerful storytelling can be and how it can suddenly make anything more relatable.

The power of sprints with BuzzFeed.

Editor of BuzzFeed, Craig Silverman, looked back at a year of BuzzFeed Canada and the lessons they learned bringing BuzzFeed into a new market. One thing that stood out for me that he does with his team is sprints. Essentially it’s a chance for people to throw out any ideas, not overthink it, and just do it. This way people aren’t overanalyzing stuff, and they are keeping ideas fresh and trying new things. Great way to keep your team engaged and creative!

Don’t talk to them, engage with them.

Of course, the highlight of my day was seeing 70-something year old, Norm Kelly, chat about him being an “old dog learning new tricks” when joining the social media game and how it helped him learn about a whole other generation, Millennials. One of the most important things Norm says he did to become a part of this young community was to get to know them, and engage with them, instead of just talking at them. This is something that so many brands miss!

Norm also shared one of his secrets to success on Twitter was to just have fun. “If you want my political views, invite me to a debate,” he said. His primary goal from day one with Twitter was to have fun with it, use it to engage, and not to ever lose site of that. (Clearly it worked)

So that ends day one of Social Media Week Toronto for me, and I can’t wait for more insights and ah-ha moments tomorrow.

Why you should go to Vintage Crawl Toronto!
TAGS SMWiTOsocial mediaSocial Media WeekToronto