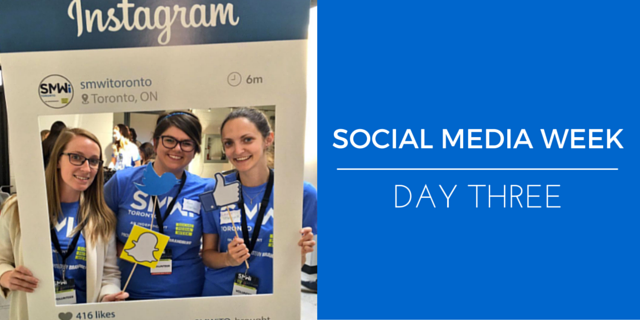 Thursday was the third and final day of Social Media Week Toronto. It was an absolutely incredible week, filled with inspiring social media professionals and speakers. Although I was starting to become a bit exhausted, and my brain was in overdrive from taking in all the great information from the sessions, day three was still another great one. Here were some of my highlights and ah-ha moments.

What Millennials really want in news by CBC.

Marissa Nelson, from CBC presented a session about the future of media in a multi-platform world where Marissa crushed all the stereotypes about Millennials not wanting real, hard hitting news. She shared that CBC has incorporated different types of content, like short Facebook videos, integrating Facebook Live during major events, and more. Not only have they discovered Millennials care more about raccoons and water skiing squirrels, CBC has become one of the most popular news outlets for the younger age demographic and continue to prove that traditional media and news is not dead.

Even the big boys make mistakes.

Asif Hossain of the Canadian Olympic Committee, Matthew Iaboni and Jay Satur of Maple Leaf Sports and Entertainment, sat on a panel about how to nurture fan-based communities. These social pros manage some of the biggest, and most engaged social accounts, and even they make mistakes. As social professionals, we’ve all been guilty of a slip every now and then, but most of us aren’t managing huge brands that would notice, even if you delete it within seconds. I found it funny and reassuring when all three of these guys told a story about their biggest mistakes and all of them had a story about accidentally tweeting from their brands accounts instead of personal. One even mentioned him using his girlfriends computer for work, and she logged on and started tweeting about the Grammy’s through the Raptor’s account. Opps!

The ins and outs of micro video and it’s increasing popularity.

We’ve seen a continued growth with micro video across more than just YouTube. Platforms like Vine and Snapchat have become increasingly popular and Instagram, Facebook, and Twitter have all implemented different video components into their platforms. This holds huge potential for businesses, and on this panel of people representing places like Twitter and the Raptors, to influencers, we chatted about the potential video holds, where we see it heading, and how to be successful on these platforms. One thing that was brought up was with the small time frames you’re given on places like Vine, it really pushes your creativity forward. The panelists also talked about experimenting, and to continue to keep producing content until you see what works. “Don’t be afraid to suck,” they said.

You want the formats of your story to fit the storytelling, not the other way around. – @seanstanleigh #SMWiTO

Behind the scenes of The Globe & Mail advertorials.

Sean Stanleigh from the Globe & Mail chatted about advertorials in his talk on how to serve up the perfect content cocktail. He showed us the behind-the-scenes look at how the Globe works with advertisers to develop content that will work and give them the best bang for their buck. He explained that the Globe starts with determining the audience of the brand they’re working with, and then taking that to analyze them, including trends on what they like or are watching/reading. They then look at influencers that play in that space to see what they’re talking about, and from there build newsworthy content that fits in with the Globe and works well with the advertiser. I had no idea there was such complexity behind this, but it made me realize how dedicated the Globe is to not just throwing in any sponsored content, but actually taking the time to make sure it benefits both parties involved.

Inside the @TwitterCanada office. How cool is this room they have for celebs? I could live here! #SMWiTO pic.twitter.com/oCfICztzl3

This wasn’t an ah-ha moment, but definitely one of the highlights of my day. Getting a look inside an office like Twitter is a rare opportunity, and thanks to Social Media Week, we got to do it! The office is located off King West, and of course, is one of those places you walk into and get extreme jealousy for the people that work there. From the open concept office, funky meeting spaces, and VIT (very important tweeters) cut outs around the office, seeing the office of a company I fan girl over was incredible.

The day, and week came to an end, and although the week was a whirlwind, and exhausting, I left fuelled and excited with all the new knowledge and ideas I got from the week. I’m already counting the days until next year!