The Do’s & Don’ts of Using Snapchat for Business 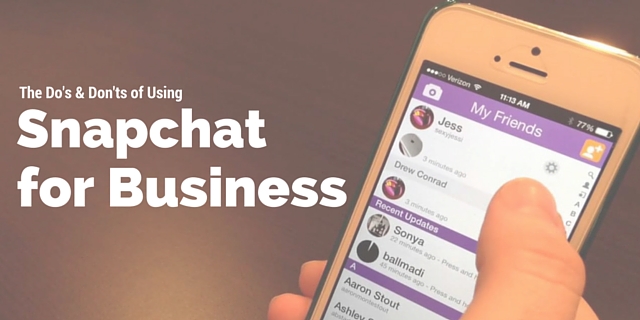 Since 2011, Snapchat has taken the world by storm, now having over 100 million daily active users, that are sending a combined total of over 400 million snaps per day. The continuous growth of Snapchat, along with the fact that it hasn’t faded out in popularity over the last 4 years, is making businesses wonder whether or not they should jump on the bandwagon and use Snapchat for their business—and more importantly, if they do, what should and shouldn’t they be doing?

There isn’t as much data out there about using Snapchat for business, mainly because the introduction of the possibility was only introduced not too long ago with the integration of feeds on Snapchat and the “discover” option with brands. Most businesses that have decided to integrate this platform into their business model have taken on developing their own Snapchat account for their audience to follow for behind the scene looks and stories from their favourite brands or businesses.

First things first—consider your target market before joining the Snapchat world. The majority of Snapchatters are female, between the ages of 13 to 25. Second off—make sure you have an idea and plan for what you are going to post. Using Snapchat once in a full moon is not going to drive the results and engagement you want.

Now, if you’ve decided to join the Snapchat movement and are ready to snap away, here are some do’s and don’ts to consider:

Now that you’re armed with some tips and tricks, snap away!

TalentEgg: How to Work in Social Media – Beginner Guide

How to Make your Employees Social
TAGS Snapchatsocial media