Recap of #SocialMediaTO at Brainstation 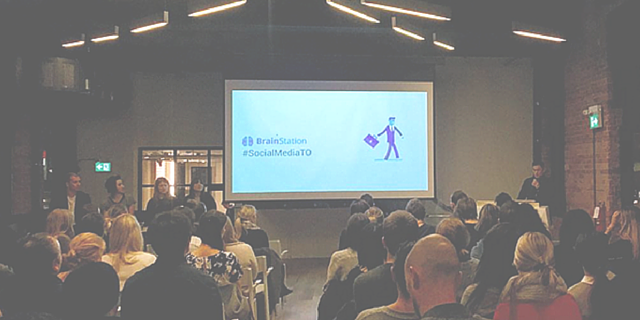 The panel started off with us learning how many people work on G Adventures, Grey Canada, and Buzzfeed Canada’s teams. The answer to me was shocking (and a bit discouraging as someone who would dream to be a part of these teams). Stephanie shared that the social team at G Adventures only consisted of two people—her and a colleague based in their UK office that allows them to cover different time zones. For a social following of 121K on Twitter alone, it’s hard to believe they work with only two team members! Francesca at Grey Canada also has a team of two working across ten different brands, and Elamin’s team consists of only him for an audience of 124K on Twitter, and almost 90,000 on Facebook. Lets just say that all three of these social pros deserve a giant pat on the back for this.

The conversation then steered towards budgets and social media spend. Francesca shared that sometimes they aren’t necessarily working with a huge social budget with clients. “The magical thing about social media is you have to make it work,” she said. As someone who personally works in the non-profit sector I can definitely relate to this. I realize I’m lucky to have ANY budget for social media. Steph explained that the majority G Adventures marketing budget is allocated to digital, but social media itself only makes up about 10% of that.

"The more we see conversions coming which we can tie to social, it lets us bite for more budget." – @stephnairn, @gadventures #SocialMediaTO

We then talked about how to determine what social media channels your brand should be on. As social media professionals, we’ve definitely seen clients and businesses thinking they should hop on every bandwagon. Each of the three panelists have really figured out what works best for different things within their organizations. For example, G Adventures finds that Facebook can really drive traffic and people into their sales funnel, Twitter is where they have more conversations with their travelers (and future travelers), and Instagram is big for engagement since they share their travelers photos. Grey Canada made the point that it’s boring to put the same content everywhere and to treat each audience on each platform to something exclusive and special while still being consistent. Elamin of Buzzfeed explained that he tries to sound like a really smart and really engaged 16 year old girl in their brands voice, and also pointed out that on social you don’t always have to drive people to other places, lots of Buzzfeed’s content is images in a place they want to see them (Ex. Facebook).

Social media #marketing tip: you don't have to be active on EVERY channel; just where your audience is! #socialmediaTO @BrainStation

“Lets make this go viral.” Every social media professional has heard these words and cringed. The panel addressed virality in our conversations, where Francesca made a quote that I wanted to be like, “Amen sister”, she said that if you’re trying to go viral on social you’re missing the point. Elamin advised that it’s key to make sure the stuff you create is quality instead of starting your plan off by wanting to make it go viral.

While we were on the topic of going viral, the panel started talking about events like Boxing Day, Mothers Day, or cultural events, and when and how to jump on the bandwagon with other brands. Grey Canada explained that it really depends on the day and the brand and if that brand would already be in that situation naturally, and all panelists stressed that brands should only really jump in when there’s a seamless fit, otherwise you’ll just look awkward.

Then we traveled off into the world of social media scheduling. I personally think scheduling is a Godsend but also realize you can’t just schedule and ignore. Buzzfeed Canada revealed that they don’t ever schedule on Twitter. They don’t like that if anything major happens and a scheduled tweet is sent out, it’ll make them look stupid. For example, during the Paris attacks the brand went entirely dark on Twitter because they felt the only thing appropriate to share at that time was news. G Adventures however schedules posts so they can reach their extremely global audience and all the time zones. For example, they’ll tweet out a new blog post at three different times in a day to hit three major markets and time zones. But even the brands that are pre-scheduling are still being aware of world events, and engaging with their audiences in real-time.

“Social media gives everyone a voice and people misuse that,” Francesca stated. Boy is this true! How on earth do these huge brands deal with all the haters and trolls? The panelists talked about influencers and ambassadors, and how sometimes if you wait a bit before responding to a hater, the situation can often work itself out, as influencers will stick up for you. One of the professionals also mentioned that the golden rule is to only respond twice to haters, then you just need to be silent because haters are often just angry for the sake of being angry.

The conversation then went to numbers and analytics, where Francesca mentioned how much clients love numbers, and Stephanie mentioned how numbers help her secure a budget for social media. People want to see results, so it’s important to be regularly tracking these analytics and taking key learnings from them to help move forward with ads and content. The panel also discussed how platforms like Facebook are almost necessary to use paid promotion to reach your audience. “It’s a necessary evil,” Stephanie described it as.

"I thought that after school I would never have to do math again…" – @fransaraco on social analytics. Same, girl. SAME. #SocialMediaTO

engagement > reach. You can buy all the reach you want. You can't buy an honest connection. #socialmediaTO

To end the conversation, a question was asked which I often hate, “What do you see as the future of social media?”. Since I know this is so hard to predict, the panel agreed that new messaging apps, and video are blowing up, and Stephanie mentioned how social is becoming the new call centre. Meaning, more and more people have higher expectations for receiving customer service on social. Which can be a scary thought for brands that have small teams with big audiences like these ones.

Facebook is positioning themselves as "the new internet" – @elamin88 #SocialMediaTO @BrainStation

Overall, the event was filled with useful tidbits from three professionals that play in very different fields. It was interesting to see the different perspectives and how certain things work for some and not others. I definitely can’t wait for another social media panel to happen at Brainstation Toronto soon!