Recently I wrote an article on what makes a great Facebook post, and although most people probably think there really is no science behind posting on any social media platform, there is. If you want to garner the most traction and engagement with your posts, it’s important to consider these variables with the posts you are generating. Here is my guide to developing the perfect Tweet.

What goes into the body of the tweet has to be well thought out. Why? Because tweets only allow you to use 140 characters, which is significantly shorter than the infinite amount of characters you can use on Facebook or LinkedIn. When crafting the body of your tweet, keep in mind that you may need room for media, like a photo or a link at the end, and also, you’ll want to add hashtags, so try to leave some space for that too!

A tweet should be straight to the point and include a call to action, or if there is no direct call to action like, “click here” or “click to learn more,” make sure that there is enough information in the tweet that the reader will know what they are about to click and why they should.

The best part of Twitter is you don’t have to worry so much about people writing TOO much and overwhelming people like many brands make the mistake of on Facebook. Twitter is made to me simple and to the point, and in fact, tweets with 100 characters or less are said to garner 17% more engagement than longer tweets.

Below is a great sample from DavidsTea. They decided not to use hashtags within their post, or a direct call to action, but their tweet still gives you an idea of what the link is going to lead to and why you should click it. 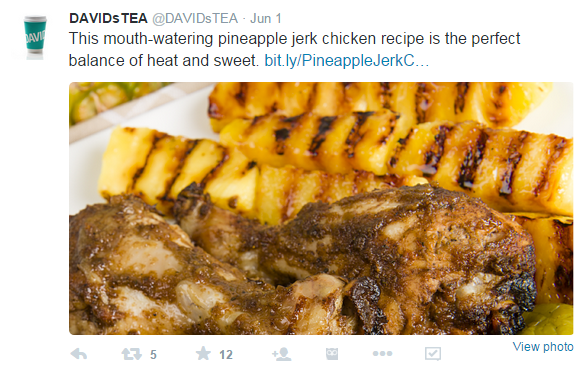 As briefly mentioned above, there are a variety of call to actions you can use within a tweet. Here are some options:

Direct Call to Action: This is pretty straight forward, because that’s exactly what this call to action is. Telling people exactly what you want them to do. For example: Click here, learn more, apply now, register here, sign-up today (followed by a link).

In-Direct Call to Action: This is hat I mentioned above in the body section. A call to action that isn’t as obvious, but the body text emphasizes or explains what they are going to be clicking, or at least entices the person to click.

Note: Not every tweet is necessarily going to have a call to action that is embedded within your post. Sometimes your post may just be informational, and you’re able to explain everything you need to in 140 characters without people needing to know more information or do something other than absorb the information you’re giving them. Below is another example from DavidsTea of what a fully informational post may look like. 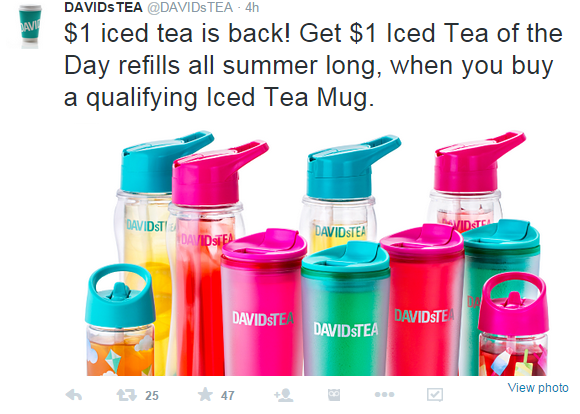 Tweets with photos or videos average two times the amount of engagement, and this shouldn’t be surprising. When scrolling through your feed, think of all the hundreds of tweets that come up, what really is enticing you to stop and read one versus just scrolling over it? Photos and visuals catch your attention quicker than words, and by using them in tweets, you’re allowing yourself to stand out more. Hey, they always said a picture says 1,000 words right?

On top of photos, think about the links you are going to include. Tweets with links also do a lot better with engagement than those without. In fact, they are 86% more likely to be re-tweeted than tweets that don’t have links. Keep in mind a link takes up around 22 characters on Twitter, so you have to logistically think that through with the limited 140 characters you have.

Below is another tweet by DavidsTea with the effective use of media. They have incorporated both a great visual, and a link, plus had an indirect call to action that entices you to click. 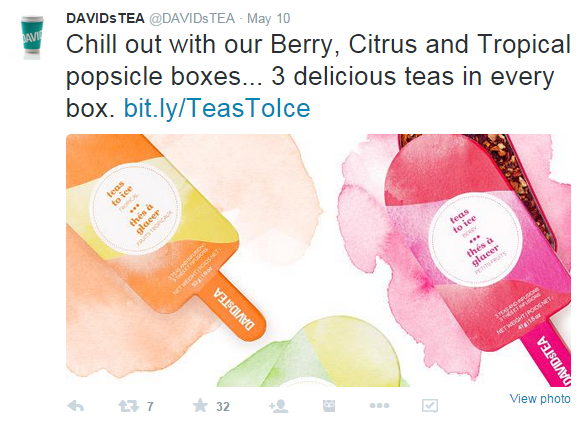 People always wonder what the deal is with hashtags. How many do you use? Where do you put them? Well here’s my advice. I suggest that you mix your hashtags amongst your tweet and/or at the end of your tweet. If you mention the word you would normally hashtag at the end, you might as well just hashtag when you first mention it. For example, below is a tweet from DavidsTea, instead of waiting till the end of their tweet to hashtag #TeaPop, they just hashtagged it throughout their tweet. Keep in mind, you should only be hashtagging a key word. If you hashtag too many things, it just become overkill and hard to read. 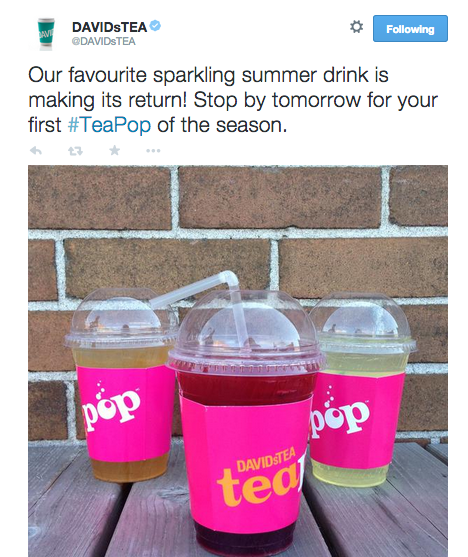 Another way to do hashtags is to put the hashtags at the end of the tweet, this may be a preference if you want to hashtag a word that you don’t use throughout the body of your tweet. Below is an example of what I mean. Another thing to keep in mind for this is to once again only hashtag a few key words. There is nothing worse than a tweet that has more hashtags at the end of it then words in the body of the tweet. 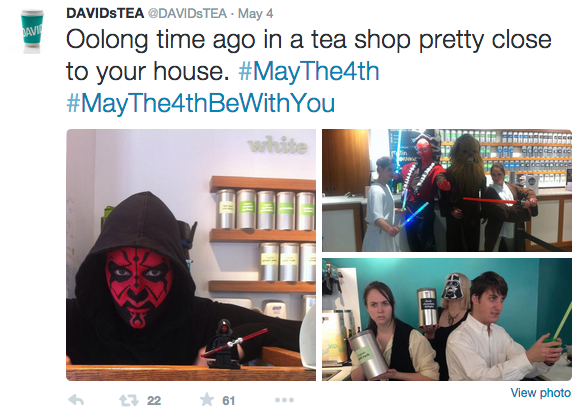 These tips will hopefully send you on the road to success when it comes to formulating the perfect tweet. If you have additional tips, please share below in the comments!

What’s the Benefit of Hiring a Social Media Professional?

How to Respond to Negative Comments & Reviews