The Layoff: Two Months In 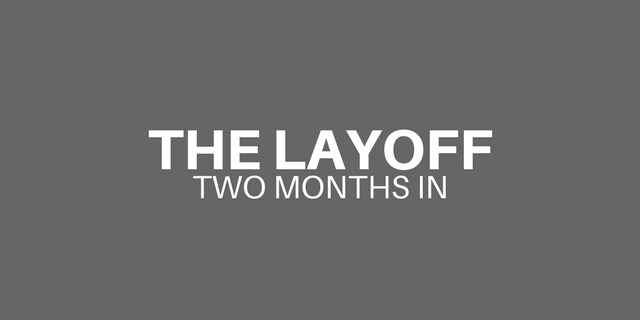 Two months ago I was laid off from my job due to changes Facebook made to their algorithm, and my job heavily being impacted by those changes.

Two months ago I stopped having a regular 9-5, stability, and a job that I loved going to every day.

It’s seriously hard to believe that it’s already been two months. No, it’s not because I’ve been living the dream and enjoying “fun-employment”, which some people would call it. In fact, I’ve realized that fun-employment isn’t a thing unless you have no drive to have a career or are loaded with cash in the bank to do whatever you want without having to worry about whether or not you have a steady income.

The truth is, not having a job has been invigorating in a lot of ways. When I first got laid off, I had phone calls, texts, messages from strangers, etc. offering their support and sympathy. However, as time passes, people move on with their lives, the wound isn’t as fresh anymore, the texts and calls start to fade, and people go on with their day in their cozy jobs, while you’re stuck in a limbo of what your next step in your life is going to be.

In those early days, it felt great to have so many options, to be able to focus all my time and attention on “what’s next?” but now that it’s been two months I feel like I’m hitting a wall. I have always done a lot of side projects and writing, which thankfully I have now to keep my brain from completely going to mush, but I just miss working. I miss the routine, I miss being challenged, I miss constantly learning from the people around me in the office. I miss having a regular pay check, and being able to think further ahead then a week when planning things, because I know where I’ll be.

But how do you still not have a job?

Now don’t get me wrong. I have been non-stop with the job hunt. So if you’re wondering how I still don’t have a job, it really comes down to the large amount of competition out there, and also how slow many companies are with the hiring process. Sometimes a job posting can be up on a website for months before they even start interviewing, and then there are five tiers of interviews with a week or two in between while they determine if you’re going to progress to the next step. It’s exciting but also exhausting, and a lot of it is just a waiting game.

In the past two months I’ve put out over 80 applications to roles, had over a dozen interviews, and also a ton of phone calls, coffees and informational interviews with people in my network. I’ve been non-stop. My job is essentially sitting on my computer pressing “refresh” until new jobs are posted that I’m qualified for. In a way, it’s exciting to see and apply jobs that really make you excited, to interview with incredibly cool places, but it is also depressing, especially when rejection emails start rolling in.

Don’t take it for granted

Now I know what you’re thinking, that you would KILL to not have to go to work every day. In fact, you probably complained at least once this week about your job. However, I’m going to let you in on a little secret, being unemployed is nice for maybe a week or two while you have all this free time to get stuff done, and binge watch that show you’ve been meaning to watch on Netflix. But that lasts for a short time until you start to pace back and forth in your apartment and start Googling: “What hobbies can I take up that cost little money?” because you’re so bored. So dear friends, stop complaining about your job! You are lucky to be employed. You’re lucky to not have to worry every damn day about what’s next (at least when it comes to your career), and if you’re so damn miserable, maybe it’s time to find a job that makes you happy!

I’m going to be okay

In the last two months there have been a ton of highs, and ton of very low lows. Job hunting is exhausting, and it takes a lot out of you mentally and physically. I have days where I’m motivated, excited, and positive, and I have days where I don’t even want to get out of bed and I wonder if I’ll ever be employed again (I know, we can all be a little dramatic sometimes).

The truth is, even though I know eventually I’ll look back at this time in my life and it’ll all make sense. It’ll make sense why I had to veer off the path I thought I had figured out. However, right now it can be hard to see so clearly. It can be hard not to feel angry, defeated, sad and a series of every emotion possible. But at the end of the day, I know I have a ton of talent and would be a great addition to a team out there. I know that my previous workplace missed out on everything I had to offer them, and I know something bigger, and better is out there waiting for me. I’m just hoping I don’t have to wait too long to find it!

Side note: If you’re reading this and have any leads in the marketing world, are hiring, or just want to chat! Reach out to me. 🙂

Getting Personal on Being Laid Off
TAGS Laid OffLay Off