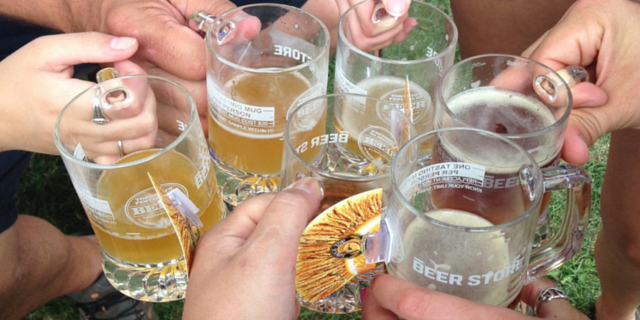 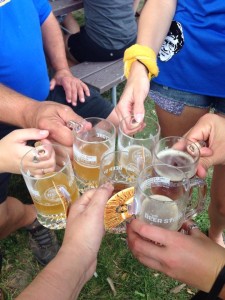 It’s the most wonderful time of the year. Basically what beer and alcohol enthusiasts like to call “Christmas in July”. It’s the Toronto Festival of Beer!

I got my first taste of Toronto Beerfest last year (2013). Hesitant at first because I wasn’t a super-fan of beer, I was blown off my feet by how awesome the day was, and this years did not disappoint either.

Toronto Festival of Beer runs in Bandshell Park  near the Exhibition Place from Friday-Sunday. You buy tickets on a day-by-day basis, and Saturday’s tickets usually sell out in April or May, with Friday following not to far behind, and Sunday usually there are some tickets left the day of the event.

The last two years I purchased the “hoptimized” tickets for the Saturday. I had some guidance when purchasing my first tickets based on my sister who had gone the previous year as well. Hoptimized tickets cost only about $10-$12 more and are 100% worth it. Besides the fact that you get 5 extra drink tokens, you also get early entry (about 1.5 hours before general admission). This may not seem like that exciting, but if you want to a) not have to 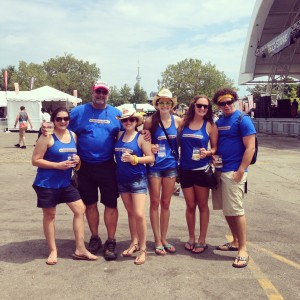 wait in a huge line that wraps all through the park, b) want first dibs on all the free swag, or c) not wait in a gigantic line to wait to buy more drink tokens, it’s worth it.

We didn’t wait in line at all for our drink tokens, but general admission ticket holders spent a large chunk of their time waiting. I mean in reality, 99% of festivals are like this, but fork out another $10 and go for hoptimized.

I tried so many different types of beers, and tasted some great food venders while I was there. This has to be one of the most fun atmospheres you will find in a festival, because I mean beer + food = happy people. Even things that would usually be grueling at a festival or event were fun. I met so many interesting people and had so many funny experiences while even waiting in the super long lineups for the bathrooms. 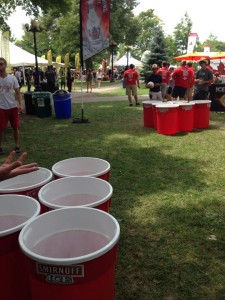 Each brewery does their own take on Beerfest. There were some that had large over the top setups like Smirnoff, who had a deck, bar, dunk tank, and giant beer pong you could play. Budlight also had a whole dance floor area with live music all day, and Alexander Keith’s had a portable brewery set up right there!

Don’t get the wrong impression though, although these mega-companies are at Beerfest the small, craft beer places definitely out number them. There are over 60 brewers, representing more than 300 brands from across the globe. This is your opportunity to try all those beverages that you’re too afraid to buy in the LCBO or The Beer Store. 1 token gets you  half a cup, and 2 gets you a full glass (1 token = $1).

Not a fan of beer? No problem! There are several beverages for you too. From fruitier beers, to ciders, to coolers/spirits. Although the majority of the festival is beer, there really is something for everyone.

One of my favourites for the day was Crabbie’s. Which was a ginger beer. They were sampling two flavours – raspb

erry ginger beer, and regular ginger beer. Sounds very bizarre and obscure but was absolutely delicious. It had me coming back and paying them a visit multiple times in the day!

There was just under 20 different food vendors sprinkled around the festival as well, and not just regular festival food. There’s a bit of everything. From porchetta sandwiches, to sushi pogos, to gourmet pizza pockets and oysters. Definitely enough food to keep a good base in your stomach for the day of drinking.

Last but not least, the entertainment & music. To be honest, Beerfest could totally get away with a great DJ for the entire day. No matter how good the act is, all I really want to do is walk around exploring the different vendors and dance. This year they had a variety of different acts on each day, but the headlining act on Saturday were The Trews.

They were great but it would’ve been awesome if they came on before 6:15pm. Beerfest ends at 8:00pm on Saturday and since The Trews played till 7:45pm that left for minimal time when they got off stage for us to use up the rest of our tokens. In fact, when the concert ended and we went to go fill up our glasses, most vendors had already shut down for the night. Although at this point this wasn’t the end of the world (especially since we could use our remaining tokens on food and merch) it would be my one suggestion for the organizers.

All in all, once again Toronto Festival of Beer was one of the best days of the year. Nothing can beat the great food, great people (seriously though) and great beverages all day long. Even last year it poured rain all day and we still found a way to have a blast. This is one event that I refuse to miss every year. Don’t wait to get tickets and miss out, because you’ll 110% regret it.

PLEASE go vote for my family in the team t-shirt contest! All you have to do is like this photo on Facebook before August 15th 2014. CLICK HERE!