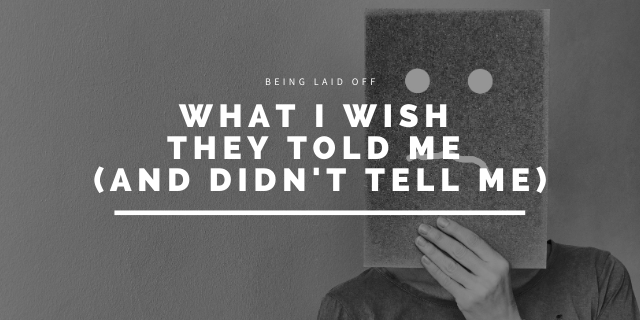 Nothing really in your life prepares you for losing your job. Back in 2018, I was completely shocked when my employer at the time laid me off (along with hundreds of others). Not only had they just confirmed our jobs were safe a day before, but I never really had a plan, or thought about what would happen if I didn’t have a job.

Being laid off is like when an unexpected emergency pops up. You don’t think about it ever happening to you, and you definitely aren’t prepared for it when it does. With unemployment rates skyrocketing in 2020 due to the global pandemic, more and more people are being forced to know what it feels like to be laid off.

I’ve written a ton about my lay off back when it happened, but one thing I never really mentioned were the things that people said to me, that I wish they wouldn’t have. OR the things no one ever told me that would’ve been very valuable to know.

Here are some of those things. Let me know if you can relate!

Don’t Say: “Enjoy the time off”

This was one thing that SO many people said to me when I was laid off, and let me tell you, it’s one of the most irritating things to hear. First off, for me to enjoy any time off, I need a cashflow so I can do things (go on vacation, etc.), and without a job, you don’t have an income to support fun things that would help you enjoy the time off. In 2020, it’s even worse because there’s legitimately nothing left to do. You are stuck isolated at-home with not even a job you can do to keep you busy and occupied.

I must admit, that at the end of the day, they were right. I look back at my time off and I did enjoy it. It gave me time to figure out what I wanted next, to be transparent about job hunting, and I even managed to have enough saved in my travel fund to do a budget trip to Portugal and San Francisco, and do yoga every day at a yoga studio I volunteered at for free classes.

Even though at the end of the day I realized that having that time off was incredibly valuable, I still didn’t like hearing this from people, so PLEASE keep this sort of comment to yourself. Especially now where not only are people being laid off, but places aren’t hiring, and it’s harder to see the light at the end of the tunnel.

I got this asked daily. Mainly from my family, however, it’s honestly a question you really don’t want to get. I understand that people just want to check-in on how you are doing, but you seriously get so tired of people asking you when you have nothing new or positive to share. I got to a point that I was having so many interviews, without any success at the end of them, and it almost got embarrassing to have to answer this question.

Instead of asking people this question, ask them how they are doing, and let them share job search information with you if they want to.

What I wish more people knew:

The importance of networking

We are all told in the business world how important it is to network. If you’re like me though, you absolutely hate cringy, forced networking events where you exchange business cards or information only to never talk to the person again.

However, everything they told me/you was true. Thankfully, I had unintentionally built quite the network for myself throughout the years. I had added random people on LinkedIn in my field, followed and conversed with professionals on Twitter, and through freelance work, had made some contacts that knew people. But even if you weren’t like me, and haven’t spent time building your network pre being laid off, here are some ways you can start doing it now:

The most important thing to remember is that it’s okay if these networking opportunities lead to nothing, it’s okay if they lead to something you end up not being interested in, but putting yourself out there on the market, in your industry can be so valuable.

It’s okay to be picky

Part of being laid off is that you feel this pressure that you need to accept any job that gets thrown your way. If you can live on unemployment insurance (EI), and your time with EI isn’t running out, then it’s okay to be picky.

I knew my worth and I didn’t want to accept just any job in my industry. I wanted to be making the same salary, if not more, and I wanted to be in a job that I knew I’d enjoy.

Now I know this will be a controversial statement, and there is no one size fits all approach. For some people, you need to accept the first job that comes your way. BUT if you have the luxury to be picky for the right opportunity, then do it, because once you start a new job, you’re not going to have as much time to keep looking for a different one.

What the heck is EI?

I had never learned anything about unemployment insurance until I was laid off. I remember panicking the first day I lost my job because I thought that I was going to become homeless living in one of the most expensive cities in the world without a job.

Now living off of EI is not practical for a lot of people. EI in Canada caps out at around $50K a year, which means if you are making anything above $50K, the max you will get is still that. So if you’re someone living off a six figure salary, $50K is going to feel like pennies when you have to adjust your life to it (especially if you are supporting a family). Unfortunately as well, a lot of people aren’t even eligible for EI. So I know I’m only speaking to a fraction of the people out there when I talk about EI benefits.

At the time of being laid off though, I was only making slightly above $50K, it was noticeably less on my “paycheck” but I could still manage to live off of it if I adjusted my life. On top of EI, my workplace gave me one month of salary, plus my bonus from my previous year of work. Everyone’s financial situation is different, but I wish I would’ve known more about EI prior to being laid off, and that although it wasn’t ideal, I could still live off of it.

Being laid off also taught me the importance of having an emergency fund. I’ve read about them, I’ve even wrote about them for freelance clients, but I never really had one. An emergency fund should have at least 3-6 months of your household income in there to support you if you lose your job or an emergency happens that prevents you from getting income. I know 3-6 months sounds like a lot, but start the fund while you still have a job and slowly, with time, it’ll add up and be there for you if/when you need it.

What were some of the things you wished you knew when you were laid off? Share in the comments!

A Guide to Being Laid Off

The Layoff: Two Months In