What Starting a Podcast Has Taught Me 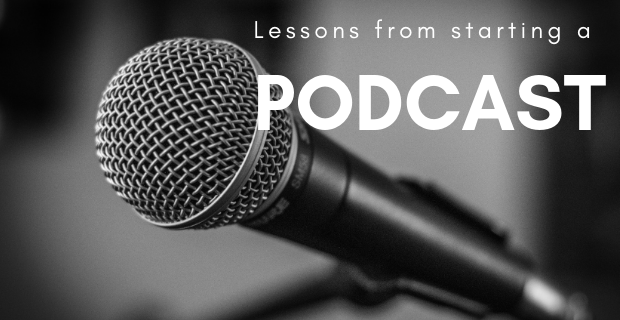 Over the last few months I’ve been working on a podcast that just launched earlier in January. My podcast, Somebody Date Us, is hosted by two of my best friends, Asal and Carley, plus myself. We talk about everything and anything related to dating and relationships.

Somebody Date Us was an idea that I came up with after realizing that dating and being single, especially in your late 20s, can feel incredibly lonely. Most of your friends are married, having kids, or in long-term relationships and you’re just here, clinging onto your one or two single friends you have left.

Starting this podcast, none of us had any idea of what to do. We had 0 experience in this field, and everything was a bit of a learning curve (and still is). However, we’ve managed to pull it together in just a couple short months and our first episode hit Apple’s Top 15 Comedy Shows in Canada.

So what has starting a podcast taught me that may help you if you’re thinking about starting one of your own? Keep reading to find out…

You need to have a balance with your co-hosts

We didn’t really overly think about this before we started, but thankfully it worked out in our favour anyway. If you plan on starting a podcast with more than one person, you need to ensure you compliment one another. It is also ideal if you all don’t always offer the same perspective as it’ll make your podcast more relatable to a bigger audience.

For example, Asal (one of our co-hosts) we call the angel of the three of us. She is the sweetheart, hasn’t done anything to risky, and has been in more longer relationships than the other co-hosts. Carley however is a big personality, loud, and very vocal about anything and everything, and I like to think I fit comfortably between the two. We all work well together because we’re not the exact same, and most of our listeners can usually relate to one of us more than the other, or a combination of all three of us.

This is probably a learning curve we are still working with. In an ideal world, we’d have access to three microphones (one for each of us), plus a soundproof studio to record in. However, since we have 0 budget, we started with only one microphone on the floor of my living room. We have since upgraded to two microphones, but we’re still learning how to get the best quality of sound.

For example, we learned that when one of us sits in a position where there isn’t a wall, window, or something directly behind them, their sound can be echoey or not as loud. We can only hope most of our listeners appreciate that this is something we’re working on, and as we grow, we can hopefully continue to improve this.

You’ll learn tricks that work for you

We were so excited to record our first two episodes that when we heard them back, we realized how much we had cut each other off while we were speaking. You learn a lot about how you talk and present yourself when you listen to yourself for hours on end. However, this can be great for picking out ways you can improve without losing yourself or pretending to be someone you’re not.

After those first two episodes, Asal came up with the idea where every time one of us had something to add in or say while we were recording, they had to raise their hand. This way we knew who would be the next to speak and we wouldn’t speak over each other or cut each other off as much. Plus, as a listener, you would have no idea this is what we were doing while recording.

Getting subscribers and reviews is harder than you think

The one bonus for us is that there is three of us with three different families and groups of friends, however, that hasn’t made it easier in terms of getting people to subscribe, listen and review. How many times have your friends or family asked you to do something that you said you would and forget because it’s not a priority of yours? Also, likely the people in your lives don’t fully understand how subscribing and reviewing can actually make a huge difference for you.

About a month before we launched our first episode we announced that it was coming soon. We set-up all our social media pagers and started posting on those channels to begin to build a following. No, we didn’t have thousands of followers before we launched (that be nice), but having people that were anticipating the launch really helped us when we put out our first episode.

You need to be honest and transparent

If you are going to start a podcast, especially one that is around a topic like dating, you need to be transparent or it’s just not going to work. You have to accept the fact that you’ll be airing your dirty laundry and instead of being shy about it, own it. This will make your podcast more relatable to your audience and people will respect and appreciate you more than if they feel you’re just telling them what they want to hear or reading off a script.

Since you likely aren’t going to quit your job to start your podcast, you are going to have to find time to record consistent episodes, edit, promote, and everything else. What we have found helps with this, especially when we’re working around four people’s schedules (including our producers), is to work a few weeks ahead.

Before we launched our podcast we already had recorded four episodes. We get together once every two weeks to record two episodes in one night. This way we are always a few episodes ahead, we can pre-schedule our episodes, and we’re not rushing or stressed to make sure we’re getting content out in time.

Starting a podcast is exciting, especially when you’re a creative person looking for an outlet. However, accept that there will be a lot of learning curves along the way, that way you’ll end up enjoying the ride versus beating yourself up.

What are your tips for starting a podcast?

How to Pull Yourself Out of an Overrun Slump