Why #YesAllWomen is Such a Powerful Hashtag 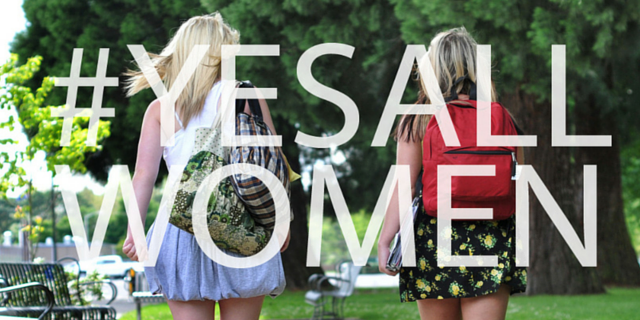 With the recent shooting rampage of Elliot Rodger, which killed 7 people including himself, being premeditated due to his frustrations of not getting the attention of women like other men his age. Many women have turned to Twitter to share their experiences of harassment, fear and sexual assault they’ve experienced, using the hashtag #YesAllWomen.

This may just be one of the most important hashtags to come out of Twitter activism yet and if you just take a scroll through some of the tweets using this hashtag, you will see several women speaking out about their experiences feeling undervalued by men. It is shocking and overwhelming to see such a stand that thousands of women (and even men) are taking after this terrible shooting in California. We live in 2014 and although we’ve made leaps of progress to create equal rights, we still have a long way to go. Take a look of some of the top tweets that really stood out to me:

According to hashtags.org the #YesAllWomen hashtag reached 1.2 million tweets within the first 2 days of it beginning with 1.2 billion impressions, and 61,500 tweets on May 25th alone. Whether you’re a male or female anyone can learn a lot from this hashtag and for everyone who thinks that we live in a day in age where women and men are treated equally, this will be a huge eye opener.

Thank you to all the brave women who spoke out and shared their stories with the Twitterverse. It’s hashtags like this that make the power of social media so valuable.