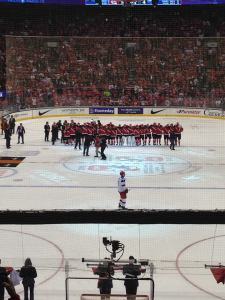 Canada after their golden win!

For Canadians, the World Juniors is one of the most anticipated hockey events of the year. Everyone cozies up by the fire on Christmas break to crowd around the TV and watch the world’s best under 20 hockey teams hit the ice.

I grew up with World Junior hockey. I remember watching the tournament every year on Boxing Day at my Dad’s house after we celebrated Christmas, I remember pre-recording the games that happened in the middle of the night when the tournament took place overseas, and I remember balling my eyes out the year that Canada lost the gold medal game against Russia. World Junior hockey is really the only hockey (next to the Olympics) that I am committed to every winter.

The 2015 World Juniors were recently hosted in Montreal and Toronto. Naturally when I heard them announce that the tournament would take place in my city, I had to find out how I could get involved. After debating spending all my savings on a ticket package, I saw on the website that I could apply to be a volunteer. Getting to attend a major sporting event for free? Yes please!

I signed up to be a volunteer back in January 2014. I was lucky to be on top of this volunteer process as they closed the Toronto application early because of the insane amount of interest they had. When applying you could choose which teams you’d prefer to be a part of. I choose my three options but I knew the one I wanted most was the Social Media Committee. Not only is this the field I work in, but it would look wicked on my resume. 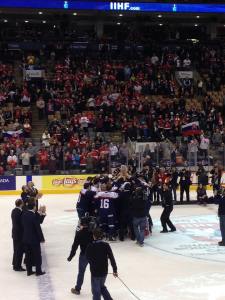 After the long process of waiting for them to go through I’m sure the thousands of applications they received for volunteers, I finally got notice that I’d be joining the Social Media Committee for the 2015 tournament in Toronto. I wasn’t really sure on the details, how many people I’d be working with, or really anything! I wasn’t even sure if I was going to be able to commit to it because I was leaving on a trip to Asia and not returning till the day before the tournament started. Luckily, everything fell into place and I attended the training the night before I flew out to Asia.

There were 750 volunteers in Toronto, ranging from security, program sellers, fan services, team ambassadors, photographers, press, social media, and the list goes on. Our team only had 7 of us. We were by far one of the smallest volunteer teams, which I didn’t mind because this meant we’d get to do more hands-on stuff.

The schedule for the tournament was great. You could to accept or decline what you could and couldn’t work, and they were great for working around other commitments. I worked over 40 hours throughout the tournament, but I didn’t have to be there every single day, so I still got to enjoy my Christmas break and recuperate from the 12 hour jet 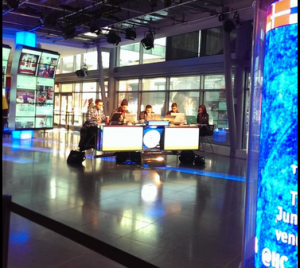 lag I had from Asia. On the other hand, if you wanted to work all day, every day, you most definitely could. They were more than open to adding in more shifts for you if there were specific games you wanted to work.

Every day I came in for a shift I did something different. Some days I ran the digital screens around the Air Canada Centre that had live tweets and social media posts running on them, which was by far the most boring job but everyone alternated doing it, which made it more bearable. Other days I was actually live-tweeting from the game, and my favourite days I got to run around the Air Canada Centre and capture video and photos for our social media channels.

Our team was set up at the media desk that usually the TV broadcasters are set up at during other sporting games. Although it was freezing being by the doors, it was awesome to be right in the middle of everything and people watch while all the fans piled into the arena each game. We didn’t get to watch every single game in the ACC but just being there and watching the games on the TV in the midst of the fan chaos, was awesome. Plus, you did get the chance to go in for some of the games, and catch parts of them. The Canada games were obviously the hardest to do that for, but witnessing the last 3 minutes of the gold medal game, and the medal ceremony were good enough for me.

What else was in it for me? We got a bunch of IIHF Nike apparel, free delicious meals and snacks whenever we were working, 50% discount at the Real Sports Apparel Store, and a volunteer party at the end of January at the Hockey Hall of Fame.

Overall my experience was amazing volunteering for the event. I learned lots, got hands on experience, and got to watch a lot of great hockey over the tournament. Not to mention, I got to watch Canada get back at the Russia for the dreadful 2011 gold medal game, and win the gold medal, a moment that I for sure will remember for the rest of my life.

2017 the tournament is back in Canada and I will be first in line to apply to volunteer again! Now who said all volunteer work has to be boring? I mean, did I mention we broke Twitter the night of the gold medal game, with almost every trend being something to do with the game?

There's very few moments in my life that I've had no words to explain. This is one of them. #proud #WJC2015 #worldjuniors

For the first time, ever, Denmark will be hosting the 2018 IIHF Ice Hockey World Championship and we are looking for more than 1,000 enthusiastic volunteers to make it a successful event!